Listen to this week’s message:

Click on image to go to original quote card

What’s your next big move? Most people know of Lucille Désirée Ball as the “crazy redhead” Lucy Ricardo from the TV series, I Love Lucy. Before that Emmy Award-winning role, she was a struggling model-turned actress in a string of second-rate movies always working for that “big break.” Instead of quitting, she kept at it with optimism and flare becoming known for her physical comedic antics. After she fell in love and married Cuban bandleader Desi Arnaz who was 6 years her junior, she strategically found a way for them to work together. At 40 years old, she convinced CBS to cast Desi who they considered “too ethnic” as her on-screen husband in a new show. Naturally brunette, she dyed her hair red to stand out. Lucille and Desi insisted that they shoot on film and started a new company to produce the show. I Love Lucy was the first scripted television program to be shot on 35 mm film in front of a studio audience. When Lucille got pregnant with her son, she incorporated it into the show becoming the first actress to be shown pregnant on TV. As vice president of Desilu Productions, Lucille Ball is credited for being television’s first female mogul. When she and Desi got divorced, she bought him out of the business. The company went on and produced classics such as The Untouchables, Mission: Impossible and Star Trek, and was eventually sold to Gulf + Western – owners of Paramount Pictures. Like Lucille Ball, go for life! Follow your heart even if there are naysayers. Don’t be afraid of being “first” and forging a new path. Dream – and then do. Live full in and you’ll have no true regrets.

Until next time, remember – it’s your divine life, live it to the fullest. The power is in your hands!

For Email Marketing you can trust 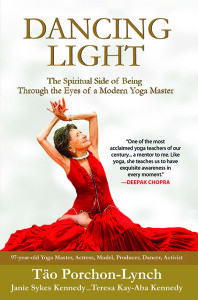 Order an autographed Hardcover Book of 101-year-old Tao Porchon-Lynch's award-winning autobiography, Dancing Light: The Spiritual Side of Being Through the Eyes of a Modern Yoga Master.

The world is watching from the UK and Germany to South Africa and Croatia! Subscribe to our YouTube Power Living® TV channel to get updates on new video postings.

Click the box on the right to watch full-screen.

Give yourself, family, friends or employees the gift of relaxation with the Power Living Mini-Escapes CD or Digital Download. Find out more and sample tracks.

Read Our Other Postings…

Click the box on the right to watch full-screen. Subscribe to Power Living TV for more inspiration.

Hi! I'm Terri Kennedy- a strategist, consultant, speaker, writer, coach and yogi. I founded Power Living to help you live your most purposeful and powerful life. If we each express ourselves fully and live consciously, together we can make this world a better place.